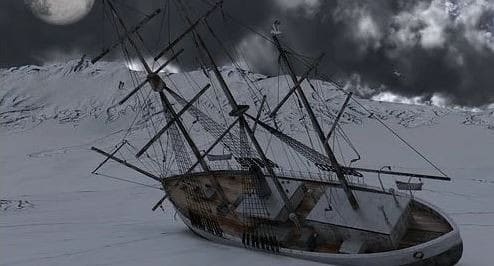 “In history, a great volume is unrolled for our instruction, drawing the materials of future wisdom from the past…” Okay, it’s a slightly abbreviated version of a historical quote from 18th century Irish philosopher & politician Edmund Burke but stay with me, there are some valuable lessons about organisational culture here…

This month, as Covid-19 restrictions in Victoria eased, I read the final chapter of ‘Ice Ghosts’ by Paul Watson – the epic hunt for the lost Franklin Expedition. (1) It seemed an appropriate topic after months in lockdown – not that Melbourne in Spring is really comparable with being stuck in the frozen wasteland of an Arctic Winter (although Sydneysiders might disagree here!)

Spoiler alert, just in case you don’t know the story: ‘Ice Ghosts’ lays bare, not just the failings of the original expedition but also the failings of a multitude of rescue missions sent to the Arctic in search of Sir John Franklin, his crew of 129 and his expedition boats, HMS Terror & HMS Erebus. If the history of 19th century Arctic exploration held any lessons for the rescue missions dispatched by the Royal Navy, it would be fair to say they largely failed to heed them.

Many elements of the story of this doomed mission, searching for the fabled Northwest passage, have struck a chord with me. There are plenty of lessons about how organisations function, how teams work together (or not), how political and personal agendas impact decision-making, what happens with poor stakeholder management, weak leadership, vested interest and so much more.

But, despite this wealth of historic material on organisational culture, one of the most memorable take-outs from the book for me is not about Franklin, his men or the various rescue attempts – it’s about the social codes of a small Arctic Inuit tribe called the ‘Netsilingmiut’. They were nomadic hunters who roamed King William Island in 1848 at the same time the Franklin expedition survivors came ashore having abandoned their ships to the ice flow.

Whilst the Netsilingmiuts inter-action with the survivors in 1846 was limited (we know they acquired items from the ships and crew), it is largely thanks to their oral history, passed down over generations, and some modern day science, that the final resting places of HMS Erebus & HMS Terror were finally discovered 160 years after they first disappeared. So, what is it about the Netsilingmiut that’s so enlightening?

Well, according to author, Paul Watson, the Netsilingmiut lived & operated within a cultural framework (a values system if you like) encompassing 8 basic community & social guidelines:

If organisational culture in business is defined as a “collection of values, expectations, and practices that guide and inform the actions of all team members” (2) then this is a pretty good starting point in my book.

It’s widely accepted that “businesses with an organisational culture tend to be more successful than less structured companies because they have systems in place that promote employee performance, productivity and engagement.”(3)

And, let’s face it, if a company’s mission, objectives, expectations and values included a list like that above, you’d probably be very comfortable working there!

Fair to say too that if the Royal Navy had known of and adopted a values framework like the Netsilingmiut, perhaps the outcome for Sir John Franklin’s expedition and the subsequent Arctic rescue missions might have been somewhat different.

If your business requires assistance with Health, Safety, Sustainability & Environmental policies and procedures contact the HSSE team at Nuffield Group via email nuffield@nuffieldgroup.com or call 1300 308 257

BACK TO OUR NEWS

Tis the season
to be
ready